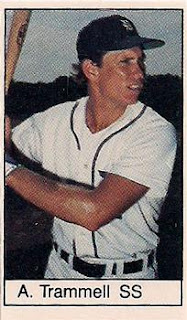 Yankees lefty Dennis Rasmussen got himself into a jam in the bottom of the third when Barbaro Garbey singled and then Tom Brookens walked.  Garbey moved to third on a fly-out by Lou Whitaker, but it didn't matter as Alan Trammell plated both with a triple!  Chet Lemon was up next, and he grounded to shortstop Bobby Meacham, but Trammell took off for home.  He beat the throw to make it 3-0, Detroit.

In the bottom of the fourth the Tigers added an insurance run off a solo homer from Larry Herndon.  Dan Petry, meanwhile, was locked in.  He made it through the first seven innings without a Yankee crossing home plate.  But in the top of the eighth, with one out, Lou Whitaker mishandled a Meacham bunt-for-a-hit attempt and then Ken Griffey doubled to move him to third.  Dave Winfield singled next to break up the shutout.  Petry got the hook and in came Willie Hernandez, the best reliever in Statis Pro.  He recorded the next five outs to earn the save. 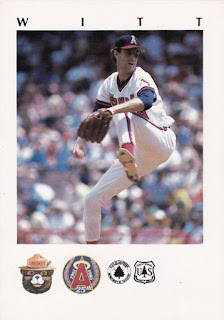 There was no rest for the weary on this day - while most of the league had this Monday off, four AL teams were duty-bound to play ball.

Both Dave Stewart and Mike Witt impressed early.  There was no scoring until the bottom of the fourth.  Doug DeCinces led of with a triple and later scored on a Juan Beniquez double.  Califonia tacked on two more when Rob Picciolo reached on a fielding error and then scored on a yet another Brian Downing homer.  Downing has been torrid of late.

The wheels came completely off for Stewart in the sixth after walking Picciolo with the bases loaded.  Dickie Noles replaced him but gave up a 2-RBI double to Rod Carew.  That's all Mike Witt needed, as he went the distance for a complete game shutout with eight K's. 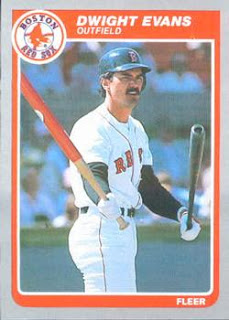 With the Detroit Tigers winning earlier in the day for a virtual tie with Toronto, the Blue Jays needed to handle business against the Red Sox to keep a half game lead in the AL East.

Dwight Evans made that immediately difficult.

Luis Leal surrendered a lead-off single to Wade Boggs and Dewey then blasted a pitch out of the park to give Boston a quick 2-0 lead.  Toronto got half of that back in the bottom of the second when George Bell went yard with the bases empty.

Jackie Gutierrez singled home Rich Gedman in the top of the fourth to put Boston out front by two again.  But it was Dwight Evans' second two-run bomb of the game in the seventh that really broke the Blue Jays back.

Oil Can Boyd, meanwhile cruised through eight innings of work with only the Bell homer counting on the scoreboard.  As a 2-6 starter in Statis Pro, he is surprisingly 9-0 on the year.

The Toronto loss means the Roar of 84 has been restored - the Tigers are back in first! 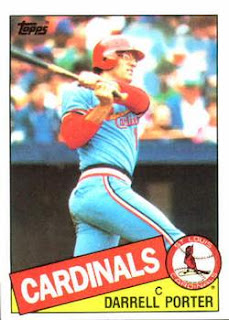 This game got ugly, fast.  Despite recording three strikeouts in the bottom of the first, Sid Fernandez allowed Lonnie Smith to score on a Willie McGee single.  He then proceeded to surrender five runs in the bottom of the third, including a three run bomb to George Hendrick.  Ed Lynch replace El Sid in the same inning...and ended up giving up another three-run bomb, this time to Darrell Porter.

About the only excitement New York drummed up was a pinch-hit, two-run home run to Rusty Staub in the eighth.  Starter Danny Cox had only allowed one unearned run prior to that. 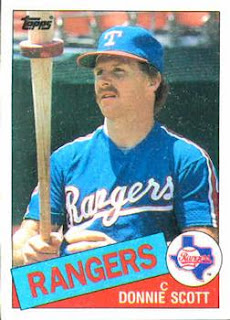 This game started as a pitcher's duel between southpaws Mark Langston and Mike Mason.  Both pitchers marched through the first four innings with relative ease, though it was Langston who was more dominant.

That changed in the top of the fifth.  George Wright led off with a single and then moved to second on a Curtis Wilkerson sacrifice bunt.  That put him into scoring position, and catcher Donnie Scott stroked a double to make it so.  Two batters later, Scott scored on a Billy Sample single.  Langston settled down after that and pitched a complete game...

...but it was all for not, because the Seattle offense couldn't get anything going.  Mason took a shutout into the bottom of the ninth, but surrendered back to back singles to  Jim Presley and Phil Bradley before getting yanked in favor of Texas closer Dave Schmidt.  Alvin Davis managed to plate Presley with a sacrifice fly, but Ken Phelps grounded out with a runner on second to end the game and give Texas the Seattle sweep. 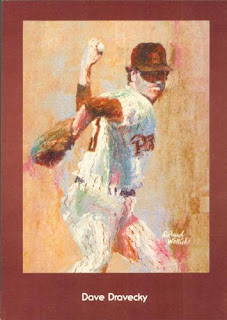 This game was basically over just as it started.  In the bottom of the first Giants starter Mike Krukow allowed two runners on base before Kevin McReynolds mashed a pitch into the bleachers for a quick 3-0 lead.  The Padres picked up another run in the second when Alan Wiggins plated Terry Kennedy after Kennedy led off with a double.

Dave Dravecky, unlike Krukow, was lights-out.  In fact, he was pitching a perfect game into the top of the fifth before a Kennedy error allowed Bob Brenly to reach.  Dravecky induced a double play grounder from Steve Nicosia, though, to keep the no-hitter intact.  But back to back walks to Al Oliver and Manny Trillo brought up Johnny LeMaster, French for "the master," and Johnny broke up the no-no and shutout with an RBI single.  Dravecky settled down after that and lasted eight innings with only three more hits.

The litany of injuries to the Giants this season caused Chris Brown to make his September call-up much earlier than expected.  He's already cashed in his 23 games on the year, his first MLB season in the real 1984.  Let's see how the late All-Star Giant did: 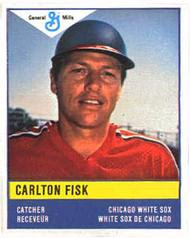 This game looked like it would be all-Chicago at the start.  In the top of the second the White Sox hit back to back homers thanks to Vance and Rudy Law (no relation).  Both came off Oakland starter Larry Sorensen.  Sorensen was still in the game in the top of the third when he allowed another five runs, giving up two more home runs this time (Ron Kittle and Vance Law again).

With a 7-0 lead heading into the bottom of the third, Tom Seaver was cruising for the White Sox.  He retired the first eight hitters before Bill Almon successfully singled.  That brought up Rickey Henderson, who singled and moved Almon to third.  Rickey decided second base looked better than first, so he was off and running on Seaver's next pitch.  I guess Carlton Fisk was worried about a quick throw to keep Almon at first, because he air-mailed it into center field, allowing both runners to score.  Bruce Bochte tagged Seaver for a three-run bomb in the fourth to bring the A's back within in two, 7-5.

The Oakland bullpen (Chuck Rainey, Keith Atherton, Bill Caudill) kept the Chicago bats quiet through the ninth.  In the bottom half of the inning the White Sox had Ron Reed on the mound to close it out.  But a Dave Kingman double and an infield hit by Bochte put two runners on with just one out.  Tony Phillips dug in and...ripped a triple to tie the game!!!  Reed got the next two outs but this one headed to extra innings.  Free baseball!!!

Neither team did much over the next two innings, and Ray Burris was working his second inning in the top of the twelfth when Fisk stepped in.  He took Burris deeeeep to give Chicago the lead!  But in the bottom of the twelfth Oakland loaded the bases on Jerry Don Gleaton with just one out and slugger Dwayne Murphy at the plate.  It looked bad for the South Side, but Murphy tapped the ball to Gleaton for a 1-2-3 double play to end the game!

As a kid I always thought his last name was "Don Gleaton" and his first name was Jerry.  Looking back now I can see that was fairly silly, but I never knew a "Jerry Don" before.  Let's see how the two J.D.'s compare!

Gleaton pitched in eleven games (one start) and 18 innings in the real 1984, but my Statis Pro version logged 25 innings.  I must have used him more as a long reliever than a LOOGY.  He was a bit luckier in the real 1984 than in Statis Pro.  Still, he recorded three wins this season, including pulling one out of his hat in the bottom of the 12th in this game.  Thanks Jerry Don!  Al Jones will fill his spot in the bullpen.
Posted by Rob at 11:22 AM 1 comment: 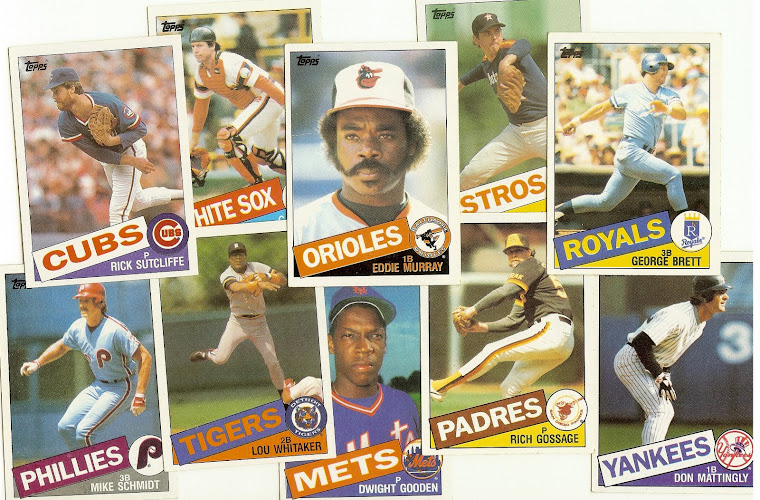 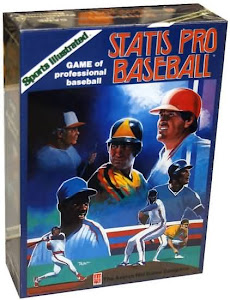